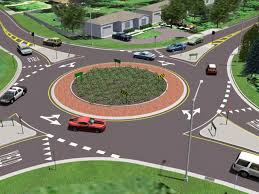 Raleigh is about to put several roundabouts on Hillsborough Street according to the article below.  As a result, it is a good time to review how to use a roundabout.

Among the changes coming with the city’s latest renewal project along Hillsborough Street will be three new roundabouts at intersections that now have traffic lights.

And this weekend the traffic lights are coming down.

The city will close several blocks of Hillsborough Street at the western end of N.C. State University’s campus starting at 7 p.m. Friday, Feb. 23, so it can take down four sets of traffic signals and create the new roundabout traffic pattern. The street is expected to remain closed until 6 a.m. Monday, Feb. 26, though it could reopen earlier, said project manager Richard Dickie.

The new roundabouts will be constructed in the coming weeks at Brooks Avenue, Dixie Trail/Friendly Drive and Shepherd/Rosemary streets, though drivers will begin using the roundabout pattern now. Traffic engineers say roundabouts slow traffic down while keeping it moving and are safer than traditional intersections.

The roundabouts are part of a $17.5 million reconstruction project that will include buried utility lines and new sidewalks, bike lanes, medians and street lights. The weekend closure will allow workers to move traffic to the outside lanes and put barriers in place so they can build the medians and roundabouts, Dickie said.

“This marks the next step in the evolution of Hillsborough Street,” he said. “We’ve finished the two sides, the sidewalks are there and all the underground improvements. We’re approaching the finish line.”

Through traffic on Hillsborough will be directed on a detour that includes Brooks Avenue, Wade Avenue and Faircloth Street. Restaurants, stores and other businesses along the street will remain open during construction.

The city expects to complete the Hillsborough Street Renewal Project in May. For more information, go to hillsboroughst.raleighnc.gov/.