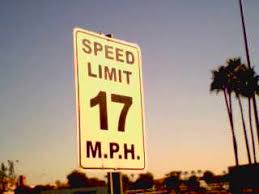 I often get clients who are either speeding or running stop signs in parking lots or in subdivisions.  Below is a great article from Shea Denning of the North Carolina School of Government on the issue.


Many subdivisions consisting of private roadways have these signs, and they often admonish drivers not to exceed a very specific speed that is not a multiple of five, such as 17 miles per hour. But so long as the subdivision roads remain privately owned and are not dedicated to a municipality, driving in excess of these specific speed limits is not a speeding infraction.

Why not? G.S. 20-141(b) makes it unlawful to drive in excess of the following speeds: 35 miles per hour inside municipal limits and 55 miles per hour outside municipal limits. The subsection does not specify the types of roadways to which it applies, but related provisions of G.S. 20-141 make clear that these limitations apply only on streets or highways, which are roadways open to the public as a matter of right. G.S. 20-4.01(13), (46). G.S. 20-141(e) permits local authorities, which include a county, municipality, or other territorial district with a local board or body that is authorized to adopt local police regulations, to adopt ordinances authorizing higher or lower speeds than those set out in G.S. 20-141(b) upon streets that are not part of the State highway system. (Local ordinances may not, however, authorize any speed in excess of 55 miles per hour.) Speed limits set pursuant to G.S. 20-141(e) are effective when appropriate signs giving notice of the speed limit are erected upon the part of the streets affected.

Thus, a municipality could adopt a 17 mile-per-hour speed limit, but only for a city street. G.S. 20-141(e); see also G.S. 160A-296 (authorizing a city to regulate public streets, sidewalks, alleys and bridges as discussed here).

But before you put the pedal to the metal, you should know this. Simply because exceeding the specified speed limit posted on a private subdivision road is not an infraction, a driver may not speed in such an area with impunity. A separate provision of the speeding statute, G.S. 20-141(a), makes it unlawful to drive a vehicle on a street or public vehicular area at a speed “greater than is reasonable and prudent” under existing conditions. Driving too fast for conditions on a private subdivision street is, therefore, a speeding infraction. In addition, driving a vehicle in a public vehicular area “without due caution and circumspection” and at a speed or in a way that endangers, or is likely to endanger, people or property constitutes reckless driving under G.S. 20-140(b), a Class 2 misdemeanor.