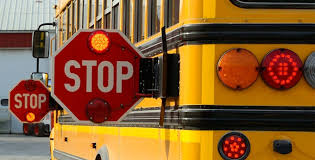 New Civil penalties for passing stopped school bus in NC.  Thanks to NC SOG and Shea Denning for the information.

Four years ago, the General Assembly increased the criminal fine for passing a stopped school bus and enacted new license revocation and registration hold provisions. During the previous year—2012—there had been more than 1,300 misdemeanor charges for passing a stopped school bus and three felony charges, two for unlawfully passing a stopped school bus and striking a person and one for doing so and causing death. Not much has changed. In 2016, there were 1,400 misdemeanor charges for passing a stopped school bus and three felony charges for doing so and striking a person. This year, the General Assembly took a different tack. S.L. 2017-188 (S 55) authorizes counties to adopt ordinances that enforce the provisions of G.S. 20-217 by means of automated school bus safety cameras and impose civil penalties for violations.
The rule. G.S. 20-217(a) requires the driver of a vehicle that approaches a school bus from any direction on the same street, highway, or public vehicular area to stop and remain stopped when (1) the bus is displaying its mechanical stop signal or flashing red lights and (2) is stopped for the purpose of allowing passengers to board or leave the bus. The driver of the other vehicle may not move, pass, or attempt to pass the school bus until after (1) the mechanical stop signal has been withdrawn, (2) the flashing red stoplights have been turned off, and (3) the bus has started to move. (The exception for vehicles traveling in the opposite direction on a divided roadway is discussed here.)
Criminal penalties. Passing a stopped school bus in violation of G.S. 20-217(a) is a Class 1 misdemeanor. A driver who willfully violates G.S. 20-217(a) and strikes a person is guilty of a Class I felony. A driver who willfully violates G.S. 20-217(a), strikes a person, and thereby causes the person’s death, is guilty of a Class H felony.
Civil enforcement. New G.S. 153A-246 permits counties to adopt ordinances for the civil enforcement of G.S. 20-217 by means of an automated school bus safety camera installed and operated on the school bus. (Absent express authorization, this type of regulation would be preempted.) Such an ordinance applies only to misdemeanor violations of G.S. 20-217—not to violations that result in injury or death.
Issuance of citation. New G.S. 153A-246(b) sets forth the procedures for civil enforcement. The county must issue a citation notifying the registered owner of the motor vehicle of the violation. The owner must receive the citation within 60 days of the violation. The citation must include an image taken from the automated school bus camera that shows the vehicle involved in the violation. It must also include an affirmation from a law enforcement officer that his or her inspection of the image reveals that the owner’s motor vehicle violated the ordinance.
Hearing. A person who wishes to contest a citation must, within 30 days of receiving the citation, request a hearing in writing. The person must also submit an affidavit stating the basis for contesting the citation. If the registered owner avers that the vehicle was, at the time of the violation, in the care, custody or control of another person or company, that person or company may then be issued a citation.
The county must institute a nonjudicial administrative hearing process for contested citations or penalties. A person may appeal an adverse administrative decision to district court.
Civil penalty. Violations of such an ordinance are noncriminal violations for which no insurance or driver’s license points may be assessed. The civil penalty for the first offense is $400. The penalty for the second offense is $750. Each subsequent ordinance violation is subject to a $1,000 penalty. A person who fails to pay the civil penalty or request a hearing within 30 days after receiving the citation waives the right to contest responsibility and is subject to a late penalty of $100 in addition to the assessed civil penalty.
Registration hold. Effective July 25, 2018, DMV must refuse to register any motor vehicle owned by a person who has failed to pay a civil penalty assessed under a local ordinance adopted pursuant to G.S. 153A-246. This provision applies to the registration of any motor vehicle whose owner’s failure to pay is reported by a county to DMV on or after July 25, 2017.
No civil enforcement in the case of criminal prosecution. If a person is charged in a criminal pleading with violating G.S. 20-217, the charging law enforcement officer must so notify the county office responsible for processing civil citations. The county may not impose a civil penalty against the person arising out of the same facts as those for which the person is charged in a criminal pleading. If a civil penalty based on the same conduct was previously imposed and paid, the county must refund the civil penalty with interest.
Criminal prosecution encouraged. G.S. 153A-246(e) states that the General Assembly “encourages criminal prosecution for violation of G.S. 20-217” when school bus camera photographs and video provide sufficient evidence to support such a prosecution. Amendments to G.S. 20-217(h) clarify, however, that “failure to produce a photograph or video recorded by an automated school bus safety camera” does not preclude prosecution.
Images as evidence. New G.S. 115C-242.1(d) requires that any photographs or videos recorded by an automated school bus safety camera that capture a violation of G.S. 20-217 be provided to the investigating law enforcement agency for use as evidence in a criminal prosecution. When such a camera is installed, it must be identified by a warning sign conspicuously posted on the school bus.