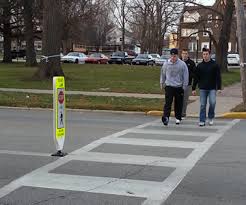 Below is a great blog from Shea Denning about Failing to Yield to Pedestrians.  The reason for revisiting this issue today is that while in court today for my client's ticket for this charge, it was discovered that the local police department was running a sting on this issue.  This is not a bad thing, however, putting an officer on both sides of the street and waiting for the driver to look at one potential crosser and then having the other officer jump into the street so it looks like the driver did not stop for the pedestrian is a little too much to swallow.  I do not think we need to trick drivers into  breaking the law.  It is clear from their actions that this particular agency was just trying to see how many tickets they could write.  Not what I call "to serve and protect".

As always, thanks to Shea Denning at the NC School of Government for her fine work.

This blog post was inspired by my lunchtime jog across campus last week, and, more specifically, by the driver of the car who sped toward me as I darted across the crosswalk on Raleigh Road.  You know who you are . . .

Pedestrians have the right of way. It’s a mantra I used frequently as an undergraduate at UNC.  But is it true?  And did it give me the right to walk brazenly in front of traffic on Franklin Street lo so many years ago?  Yes and no.

Several provisions of Chapter 20 govern the rights of pedestrians. First, G.S. 20-173(a) provides that when there are no traffic control signals a vehicle must yield the right of way to a pedestrian crossing within any marked crosswalk or within any unmarked crosswalk at or near an intersection by “slowing down or stopping if need be.” The term “unmarked crosswalk” is not defined In Chapter 20, but the state supreme court has defined it as “that area within an intersection which also lies within the lateral boundaries of a sidewalk projected across the intersection.” Anderson v. Carter, 272 N.C. 426, 430, 158 S.E.2d 607, 610 (1968). To have an “unmarked crosswalk,” there must be a sidewalk or ” ‘sidewalk like area'” on at least one side of the intersection.  Tucker v. Bruton, 102 N.C. App. 117, 401 S.E.2d 130 (1991).

G.S. 20-173(b) requires the driver of a vehicle entering or exiting an alley, building entrance, private road, or driveway to yield the right-of-way to any pedestrian or person riding a bicycle approaching on any sidewalk or walkway that extends across the alley, entrance, road, or driveway.

But what about intersections that do have traffic control signals?  If the intersection has, in addition to stop lights, pedestrian signals that instruct pedestrians to “WALK” or “DON’T WALK,” pedestrians must comply with those signals. G.S. 20-172(b). A pedestrian facing a “WALK” signal may proceed across the road and drivers of vehicles must give them the right of way. “DON’T WALK” can’t be taken so literally.  When this signal appears, a pedestrian may not begin to cross the road, but a pedestrian who is already in the roadway may continue to proceed to a sidewalk or safety island while this signal is showing.

If an intersection has signals for traffic but not for pedestrians, pedestrians must follow the vehicular signals “as they apply to pedestrian traffic.” G.S. 20-172(c). And turning vehicles must yield to pedestrians within marked or unmarked crosswalks. Wagoner v. Butcher, 6 N.C. App. 221, 170 S.E.2d 151 (1969).

Pedestrians crossing the road at any place other than a crosswalk must “yield the right of way to all vehicles upon the roadway.” G.S. 20-174(a). And jaywalking is prohibited. Pedestrians may only cross between adjacent intersections with traffic control signals within a marked crosswalk. (If you’ve ever wondered why crossing in the middle of the street is called jaywalking, Oxford can explain.)

There is a catch-all pedestrian protection provision in G.S. 20-174(e) which requires that drivers “exercise due care” to avoid running into pedestrians on the roadway and “exercise proper precaution” upon seeing a “child or any confused or incapacitated person upon a roadway.” Likewise, G.S. 20-155 requires drivers to yield the right-of-way to a pedestrian crossing within a marked crosswalk or “any regular pedestrian crossing included in the prolongation of the lateral boundary lines of the adjacent sidewalk at the end of a block” except at intersections where traffic is being directed by officers (think Skipper Bowles and Manning Drive after a Carolina basketball game victory).

Violation of any of the above-cited provisions is an infraction, punishable by a $100 penalty. G.S. 20-176. But a violation by a driver that results in a pedestrian’s death constitutes the more serious offense of misdemeanor death by vehicle.

So, drivers, if you see me or anyone else in the crosswalk, slow down, or even stop if need be.